The pulmonary ventilator, which has been developed by a team of experts headed by Prof. Karel Roubík, from the Faculty of Biomedical Englineering of the Czech Technical University in Prague, in collaboration with partners from COVID19CZ and other experts, has received certification from the FDA (the United States Food and Drug Administration). This is a very prestigious award.

The United States government agency FDA has confirmed that the CoroVent pulmonary ventilator, produced in Třebíč by the MICo Group, has met all the criteria for safety and for its declared purpose. It has therefore been approved for emergency use in healthcare facilities for treating patients with Covid-19 under conditions set out in the Emergency Use Authorization (EUA). With this certification, CoroVent can be supplied anywhere in the world where the certification is recognized, i.e. outside the borders of the European Union.

“Right from the beginning of the design of the CoroVent ventilator we of course took into account the need to get this certification. We therefore concentrated not only on the functionality of the ventilator, its utility properties and its safety for patients, but also on complying with the standards and meeting the requirements for ventilation and healthcare technology in general, including carrying out risk assessments, maintaining  detailed technical documentation, keeping records of details of tests and measurements, etc. Thanks to this work, it was not difficult for us to submit everything that the FDA has required from us. This careful approach and our knowledge of the certification process has paid off for us,” Professor Karel Roubík declares.

“This is an excellent result. Within 161 days from the beginning of the development work at the Czech Technical University in Prague, CoroVent has obtained certification from the FDA in the United States, and can be set up in the USA and wherever the certification is recognized. That is to say, everywhere outside the EU countries. With American certification, we can start exporting the equipment. This is a great success for the team of experts headed by Prof. Karel Roubík, for MICo, and also for the communication and diplomatic support team at the CTU rector’s office,” says CTU rector Dr Vojtěch Petráček. “I also want to thank all partners and donors who participated in the collection carried out by the Donio Foundation. We greatly appreciate the help provided by all the donors.”
Within the framework of a licensing agreement with CTU, the MICo Group started up serial poduction of the ventilator at the end of April this year. “I’m not going to say that these recent months have been easy for us. They haven’t. The lack of FDA certification was a fundamental problem, and there was some potentially very interesting and lucrative business that we actually missed out on because of this. Together with CTU in Prague, we therefore made enormous efforts to get the certification, and today, after almost four months of intensive work, I can say that we have suceeded,” says Jiří Denner, owner of MICo Medical, whose company produces  CoroVent ventilators. “Although obtaining FDA Emergency Use Authorization certification was the fundamental thing for us, I wouldn’t like to mislead the public. CoroVent has not yet obtained the standard certification for use in healthare establishments. We are working on this certification, but it is a long-distance race. The instrument is currently certified for use in urgent cases, and many countries consider this certificate to be a sufficient guarantee for the functionality and the safety of CoroVent,” Jiří Denner points out.

CoroVent has been doing well on the European level. It won second place in the EUvsVirus  hackathon. This was the biggest pan-European online event of its type, which was initiated by the European Commission, together with the European Council for Innovation. CoroVent also took second place in the Hack the Crisis Czech Republic hackathon, organized by the CzechInvest Agency, which supports emtrepreneurship and investment. No other project of its type has emerged in Europe in these recent months that has reached the production and certification phase.

CoroVent would not have emerged without the financial support provided by partners in an overall amount of CZK 29 026 000. The collection of funding for the ventilator was organized by the Donio Foundation, thanks to which CZK 22 million was raised within two weeks. CZK 5 million was donated to the project by Coca Cola, via the Red Cross. Thanks to the collection and the donors, these instruments could be prepared straightaway for use by patients in the Czech Republic in the event that the pandemic situation would deteriorate. The Czech Technical University in Prague takes this opportunity to thank all contributors. 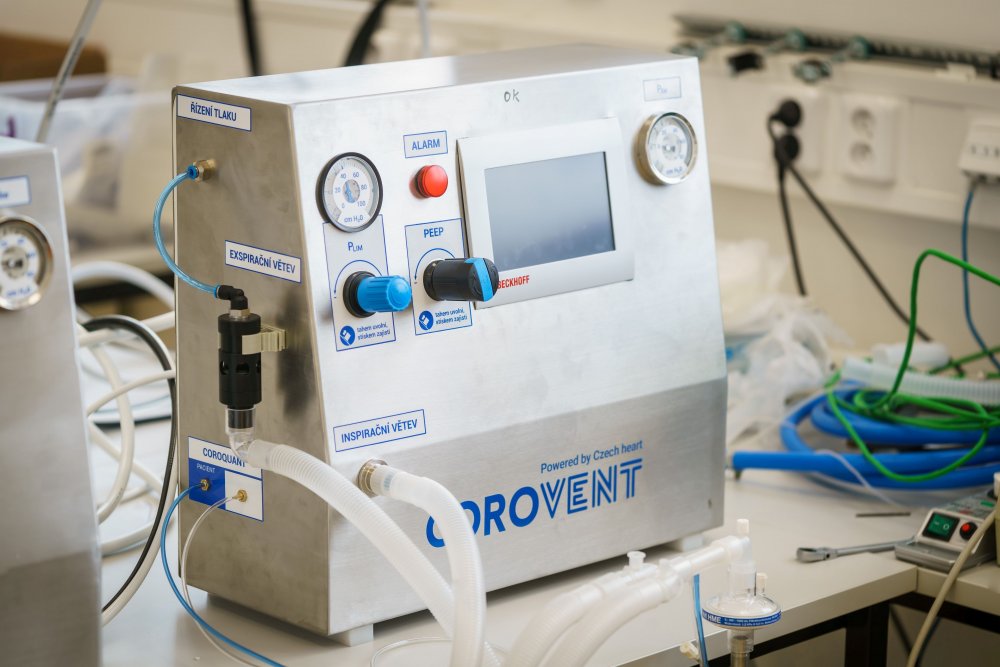